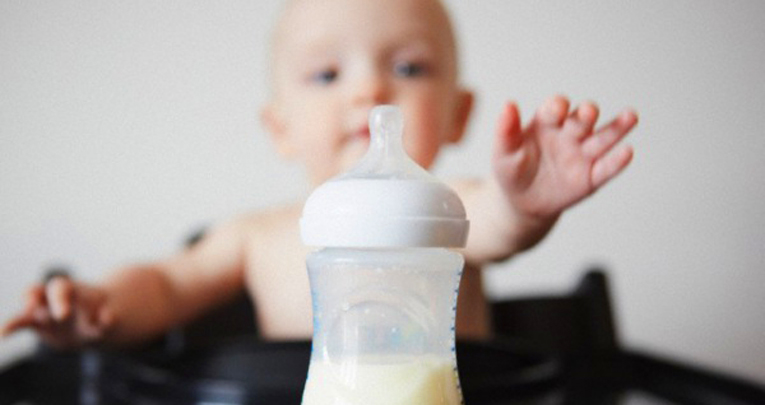 Genistein (GEN) is a natural xenoestrogen (isoflavonoid) that may interfere with the development of estrogen-sensitive neural circuits. Due to the large and increasing use of soy-based formulas for babies (characterized by a high content of GEN), there are some concerns that this could result in an impairment of some estrogen-sensitive neural circuits and behaviors. In a previous study, we demonstrated that its oral administration to female mice during late pregnancy and early lactation induced a significant decrease of nitric oxide synthase-positive cells in the amygdala of their male offspring.

In the present study, we have used a different experimental protocol mimicking, in mice, the direct precocious exposure to GEN. Mice pups of both sexes were fed either with oil, estradiol or GEN from birth to postnatal day 8. Nitric oxide synthase and vasopressin neural systems were analyzed in adult mice. Interestingly, we observed that GEN effect was time specific (when compared to our previous study), sex specific, and not always comparable to the effects of estradiol. This last observation suggests that GEN may act through different intracellular pathways.
Present results indicate that the effect of natural xenoestrogens on the development of the brain may be highly variable: a plethora of neuronal circuits may be affected depending on sex, time of exposure, intracellular pathway involved, and target cells. This raises concern on the possible long-term effects of the use of soy-based formulas for babies, which may be currently underestimated. 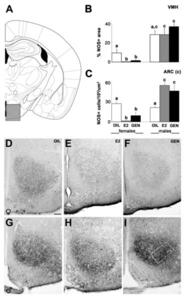 Histograms and microphotographs illustrating the immunohistochemical immunoreactivity for nNOS in the ventromedial and arcuate nuclei.
(A) Schematic diagram of the coronal section where the photographs were taken.
(B) Histograms representing nNOS-ir in VMH. Female treated groups showed a lower immunoreactivity in comparison with the same male treated groups, but this sexual dimorphism is not present in control groups.
(C) Histograms representing nNOS-ir in a caudal level of ARC. In females, E 2 or GEN treatments induced a decrease of NOS+ cell density whereas in males they induced an increase. In both GEN and E 2 treated groups we found a sex difference in the density of nNOS+ cells, while in control groups there was no dimorphism. Histograms for B are expressed as percentage of area covered by stained elements. Histograms for C are expressed as cells/10 5 µm 2 ; OIL, white bars; E 2 , grey bars; GEN, black bars. The significant differences (see results) are denoted by “a”, “b”, or “c”.

Microphotographs illustrating the VMH-ARC of females (D-F) and males (G-I) treated with either OIL (D and G), E 2 (E and H) or GEN (F and I).
Magnification bar =100 µm