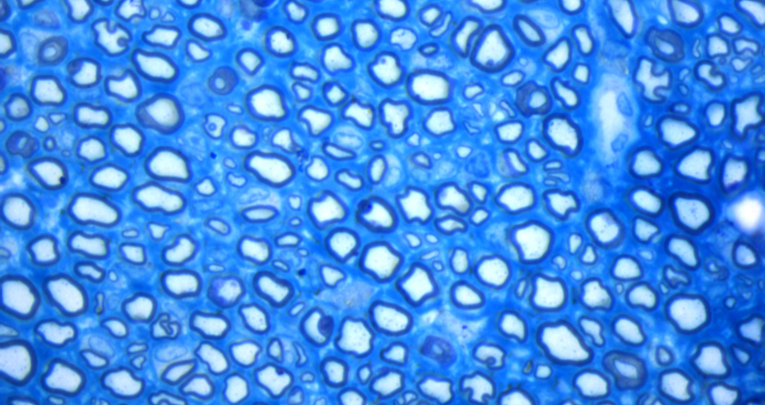 European Journal of Neuroscience
Read one of the top EJN articles written by researchers in Italy!

The European Journal of Neuroscience presented a collection of pioneering and original research and reviews articles in the fields of molecular, cellular, systems, behavioural and cognitive neurosciences free to access until the end of 2018.

A pubblication by Prof. Stefano Geuna's Research Group is one of the 10 written by researchers in Italy.

The peripheral nervous system has an intrinsic capability to regenerate, crucially related to the ability of Schwann cells (SC) to create a permissive environment, for example, through production of regeneration-promoting neurotrophic factors. Survival, proliferation, migration and differentiation of SC into a myelinating phenotype during development and after injury is regulated by different Neuregulin1 (NRG1) isoforms.

This study investigates the expression of different NRG1 isoforms and of their ErbB receptors in distal rat median nerve samples under regenerating conditions after a mild (crush) and more severe (end-to-end repair) injury and under degenerating condition. The expression of the NRG1/ErbB system was evaluated at mRNA and protein level, and demonstrated to be specific for distinct and consecutive phases following nerve injury and regeneration or the progress in degeneration.

For the first time a detailed analysis of expression profiles not only of soluble and transmembrane NRG1 isoforms, but also of alpha and beta as well as type a, b and c isoforms is presented. The results of mRNA and protein expression pattern analyses were related to nerve ultrastructure changes evaluated by electron microscopy. In particular, transmembrane NRG1 isoforms are differentially regulated and proteolytically processed under regeneration and degeneration conditions. Soluble NRG1 isoforms alpha and beta, as well as type a and b, are strongly upregulated during axonal regrowth, while type c NRG1 isoform is downregulated. This is accompanied by an upregulation of ErbB receptors.

This accurate regulation suggests that each molecule plays a specific role that could be clinically exploited to improve nerve regeneration. 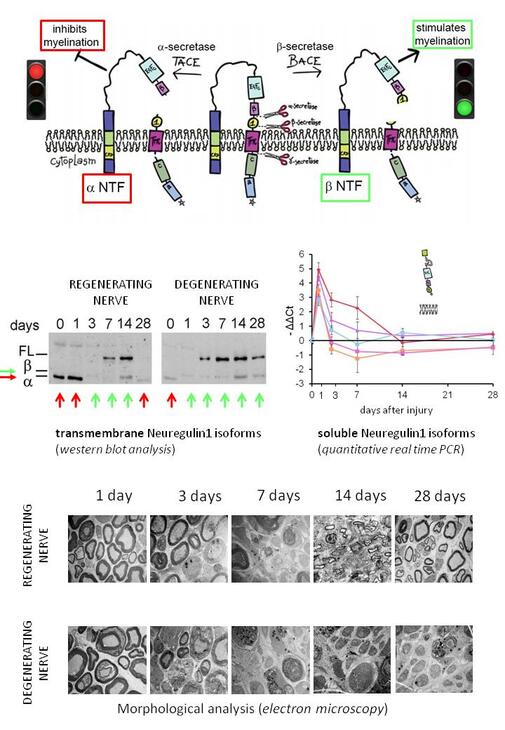 After nerve injury, Neuregulin1 (NRG1) activity is finely regulated both at transcriptional and post-translational level

Soluble NRG1 is released by Schwann cells, stimulating their dedifferentiation, proliferation and survival. By quantitative real time PCR we demonstrated that different soluble isoforms are strongly up-regulated by Schwann cells immediately after injury.