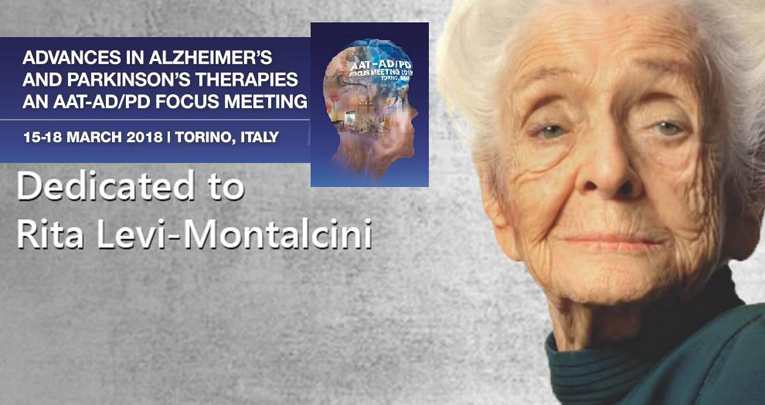 The Conference, dedicated to Nobel Prize Rita Levi-Montalcini, will present all the latest breakthroughs in treatment, translational R&D, early diagnosis, drug development and clinical trials in Alzheimer's, Parkinson's and other related neurological disorders.

Our researcher prof. Elena Tamagno ( Brain development and disease Group ) will give a lecture on "Mechanism of Tau protein aggregation" on saturday 17 march.

A series of clues indicate that in Alzheimer’s disease (AD) the accumulation of amyloid β (Aβ) in the brain is the primary and early event that induces neuronal degeneration, characterized by accumulation of conformational altered and aggregated tau protein. According to the amyloid hypothesis the physical and chemical changes of tau leading to its polymerization are initiated by Aβ accumulation.

How Aβ mediates alteration and aggregation of tau is uncertain, although three major mechanisms have been proposed:
i. Aβ activates kinases that phosphorylate tau, altering its capacity to bind tubulin;
ii. Aβ alters the proteasomal degradation of tau, increasing its concentration in free state;
iii. intracellular aggregates of Aβ have a nucleation effect on tau.

The third hypothesis is supported by the occurrence of tau pathology in different types of cerebral amyloidosis. In this context, we have observed that monomeric preparations of Aβ1-42 are capable of altering the aggregation and conformation of tau protein when injected in mice with a pure human tau (hTau) background, through activation of phosphokinases as well as impairment of tau degradation through the inhibition of proteosomal activity.

However, Aβ is not responsible for tau changes in Tauopathies. Hyperphosphorylation, decreased tubulin binding, increase of homologous isoforms are known mechanisms of tau assembly. In addition, a nucleation effect of small aggregates of tau on the progression of tau pathology is suspected, because abnormally conformed tau spreads from cell to cell in a prion-like manner.
We found that oligomers and monomers of tau, intra-ventricularly injected into hTau mice, foster tau pathology by different mechanisms. Whereas oligomers induce the aggregation of tau through a nucleation effect, regardless of the activation of tau specific kinases, monomers produce a toxic cleavage of tau through calpain activation and induction of apoptotic cell death. Our data suggest that distinct states of aggregation and conformation of the proteins involved in AD have different pathologic effects that can influence the large heterogeneity of AD phenotype.