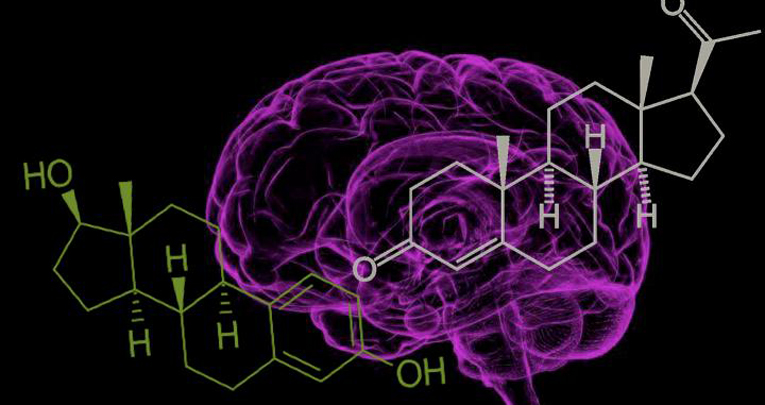 The kisspeptin system is clustered in two main groups of cell bodies (the periventricular region, RP3V and the arcuate nucleus, ARC) that send fibers mainly to the GnRH neurons and in a few other locations, including the paraventricular nucleus, PVN. In physiological conditions, gonadal hormones modulate the kisspeptin system with expression changes according to different phases of the estrous cycle: the highest being in estrus phase in RP3V and PVN (positive feedback), and in ARC during the diestrus phase (negative feedback).

In this work we wanted to study these hormonal fluctuations during the estrous cycle, investigating the role played by progesterone (P) or estradiol (E 2 ), alone or together, on the kisspeptin system. Gonadectomized CD1 female mice were treated with P, E 2 or both (E 2  + P), following a timing of administration that emulates the different phases of estrous cycle, for two cycles of 4 days. As expected, the two cell groups were differentially affected by E 2 ; the RP3V group was positively influenced by E 2 (alone or with the P), whereas in the ARC the administration of E 2 did not affect the system. However P (alone) induced a rise in the kisspeptin immunoreactivity. All the treatments significantly affected the kisspeptin innervation of the PVN, with regional differences, suggesting that these fibers arrive from both RP3V and ARC nuclei. 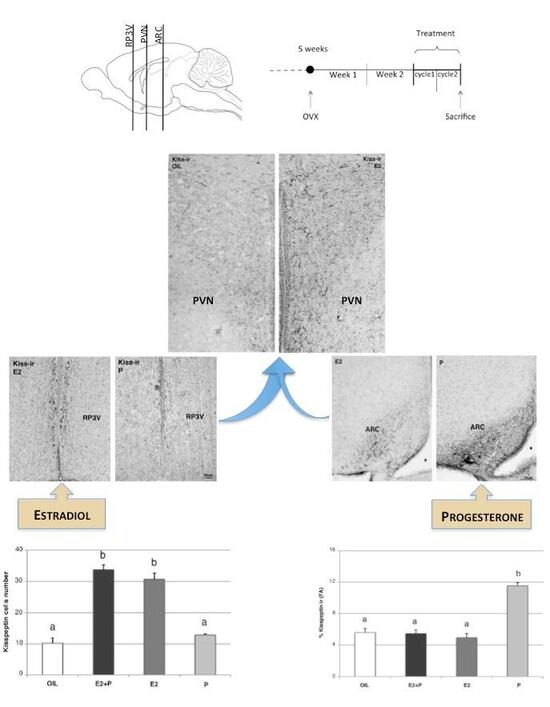 Fig: Insets in the upper represent the sperimental procedure and levels analyzed of mice’s brains. Bottom left, image and histogram show the effect of estradiol (E2) (alone or together with progesterone, P) in rostral periventricular region of the third ventricle (RP3V) on kisspeptin system; bottom right the activational effect of P in arcuate nucleus (ARC). The kisspeptin fibers project prevalently from RP3V, but also from ARC, to Paraventricular nucleus (PVN), that presents an increased of kiss innervation with all treatments.